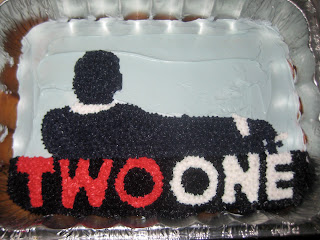 for some reason i kept forgetting to post this one... i think i was waiting for the mad men season finale, as i didn't think it was fair to steal their thunder. i haven't watched it yet, but all the super famous people i met* this weekend at the austin film festival said it was really fantastic.

this cake was pretty interesting to work on. simple, simple shapes, but i swear i sculpted that ear for about 30 minutes. i was worried too; black icing is always tricky, as it often tastes like stale battery acid. luckily, my friend was turning TWOONE, so there was plenty of vodka and my "girl mojitos" to chase it down with. and for the record, mojitos are delicious. we can't all drink old fashioned's like don draper.

TOTAL DECORATING TIME: can't remember + a 2.5 hour car trip from houston to austin + an awful hangover the next morning when i had to move all my furniture.

from the writer and executive producer of the sopranos,
sassy badger