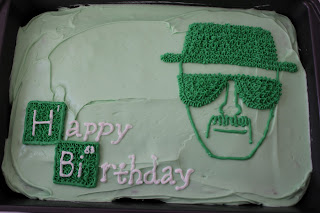 although i wasn't the first of my friends to jump on board with breaking bad, i've certainly jumped on said board with a fierce ferociousness, and i'm finding it incredibly difficult to talk about this cake without delving into spoilers, conspiracy theories, or shot-by-shot episode deconstruction. so, i guess i'm just going to talk about random shit, which, i know, is a huge detour from the usual fare here on this blog.

first things first. this cake taught me that i could totally be a drug dealer.

our kitchen sink is broken, so i wasn't able to mix icing colors, as my whole apartment actually fits in the sink, and i didn't want to flood my domicile... kind of just like dogs not wanting to crap where they sleep. well, that led to me mixing as few colors as possible and cleaning out the bowls in the bathroom. in terms of meth scouts, i totally earned my "mixing things" and "working out of tiny spaces" badges. excuse me while i ask my mom to sew the badges onto my sash, which can also act as a stranglehold should you be attacked by a member of a drug cartel. look who just earned her "resourcefulness" badge?

because i had to adjust my original design for this cake, which was so high concept that i won't even bother you lesser minds with it, i decided that i should, at least, make the font as breaking badass as possible. omg, do you see what i did there? so, i set up the font to look like that in the opening credits of the show. i didn't have to research what "h" stood for on the periodic table or what tiny little number went up in the top corner. "basic chemistry" badge? check. however, i did have to look up "bi" or bismuth. now, a lot of people in the internet-verse apparently think it is really funny to say that bismuth's atomic number is 69... bi 69. hilarious. so, i was about to put 69 on the cake, but, luckily, that little voice inside my head, aka my genius, said i better check that. so, i did. after extensive research (a second google image search) i learned that bismuth's atomic number was actually 83. with that, "attention to detail" and "nothing gets by me attitude" become the fourth and fifth badges on my sash, respectively.

i had originally written "perspectively," but then i changed it. there goes my genius again, screaming "nothing gets by me!"

anyway, my next meth scout badge, "hiding things in secret places," is hard to show you in the first picture, so here's a look at the cake before it was baked: 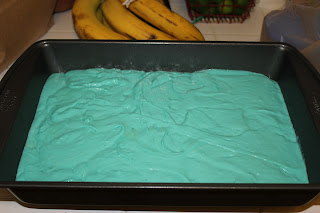 if you've never seen breaking bad then you might not know that the main dude makes blue meth. this looks nothing like meth, but it is blue cake. oh, that's another great badge, "knowing what meth looks like." i was able to hide this blue cake like walt is able to hide his blue meth in SOMETHINGSPOILERY... i won't ruin anything for anyone, but, if you really want to know, the letters to the answer are sprinkled throughout this post.

wow, that's really something. i made one of my easiest cakes to date, and, yet, i still came away with eight meth scout badges. two more, and i will be upgraded to master cook! can't wait to get my "lying to my wife and kids" one out of the way.

TOTAL DECORATING TIME: 1 hour + 1 joke stolen directly from tina fey's bossypants, the letters of which are sprinkled throughout this post.

in the empire business,
sassy badger
Posted by b. k. friend at 11:42 PM No comments: