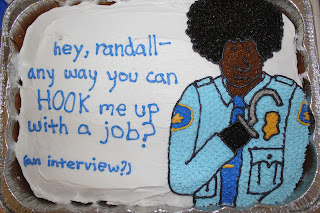 so this cake was solely made as an addition to my resume that i sent out to a new bill lawrence (scrubs, spin city, cougar town, clone high, things i only dream of doing) pilot called like father. basically the guy hiring is his producer who happened to play the hook-handed security guard on scrubs... hence this cake.

i figured i had nothing to lose. except that it's ash wednesday, and i gave up sweets and i COULDNT EVEN LICK THE CAKE BATTER OUT OF THE BOWL.

so, randall winston, if you're reading this, i suffered a ton while baking. i'm sorry that looks nothing like your face. there should really be more pictures of leonard on the interweb. again, i'm sorry this doesn't look like you. although maybe you'd be weirded out by that too much? maybe you're already super weirded out?

right, well, like i said, who knows if anything, probably nothing will happen. however, if any of my twelve readers is looking for a PA for their television show... here's my resume. oh yea, mom and dad, there's my resume.

oh, did i forget to mention the awesome pun? that's because it speaks for itself.

TOTAL DECORATING TIME: 2.5 hours + 3 episodes of scrubs that i "had" to watch through to find a screen cap of this guy. word of advice, don't yank your arm out of the ice machine.

p.s. - mom and dad and other concerned citizens - i am applying to jobs in the traditional fashion, too.
Posted by b. k. friend at 6:07 PM No comments: 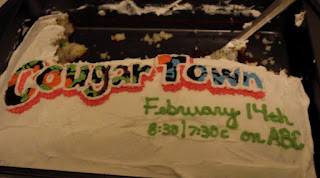 yea... i accidentally deleted the picture of the whole cake, but at least people seemed to enjoy it?

anyway, cougar town, had a contest where fans were supposed to take pictures of themselves playing penny can (it's a game about throwing pennies in cans, moving on) in crazy places. so, obviously, my friend, ben, and i went crazy X-TREME. although, i'm sure my twelve readers have already seen this, but WATCH OUR VIDEO.

BEN AND BARBARA'S X-TREME PENNY CAN

but, like, here's the thing. when the people said "photo contest," they really meant photo. not moving photos or anything. sorry, we're film students. sorry we're not sorry.

so, apart from a shout-out on twitter (which is basically social currency these days), we did not win. the winner played penny can in egypt... big whoop... on a camel... oh, ok, yea pretty sweet.

still, we had an awesome time making it, and we got to drink and eat cake. win-win. everyone watch cougar town!

TOTAL DECORATING TIME: 1.5 hours + about 17 cents down the drain after shooting that video.

not about cougars anymore,
sassy badger
Posted by b. k. friend at 5:51 PM 1 comment: