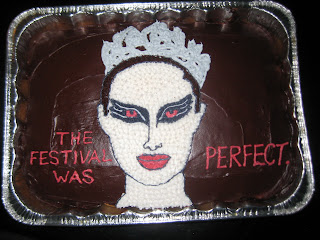 i was only able to see two movies at aff this year, 127 hours and black swan. both seriously MESSED ME UP, but i highly suggest you go see both; it's only fair.

anyway, this cake was basically a bribe for letting me skip an entire week of work. however, it might have ended up landing me more work in the future. the film guys at the office sent a picture of this to the producer of black swan and some guys at fox searchlight. move over spielberg, i'm running your craft service and your animatronic shark is in the way of my sandwich table. but for serious, that was pretty cool, and i haven't been sued yet for any copyright infringement. and natalie portman's "people" haven't shown up at my door or anything, although that would probably be worth it too.

hey, if i learned anything from this movie, it's that you have to do what it takes to get ahead. if that means exploiting queen amidala in some bird makeup just to make connections in the biz, then so be it. i'll see you in hollywood, bitchesssss. 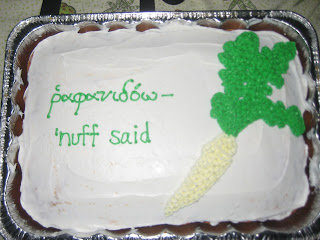 oh dear. it's a greek cake. AGAIN. and it's a radish! why? because we learned there is one word in greek that literally means to stick a radish up your fundament aka bum. sounds FUNdament, right? yes, but wrong. it was actually a really gross form of punishment. so the next time you find yourself in ancient greece, don't even think about adulteratin'.

in case that isn't enough happy FUNdament times for you, i took this one to class, and we didn't even get to eat it. instead we were all "radished" by the hardest quiz known to man, woman, and vegetable. on top of that, it got a little too chummy with a liter of rc cola, and it didn't survive the bus ride home. however, as you can plainly see, it's not like a whole lot of hard work went into this one.

TOTAL DECORATING TIME: 30 minutes + 1 vegetable that i will never eat ever again

banging on a trashcan, drumming on a streetlight,
sassy badger
Posted by b. k. friend at 11:16 PM No comments: