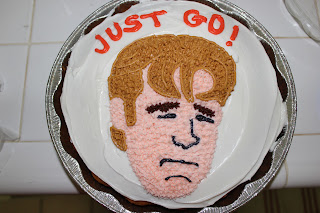 in these next few days, private practice is closing its doors/tearing the whole thing down, and I HAVE SO MANY FEELINGS ABOUT IT. all of them perfectly captured by james van der beek's tour de force of acting in the season three finale of the american treasure, dawson's creek: 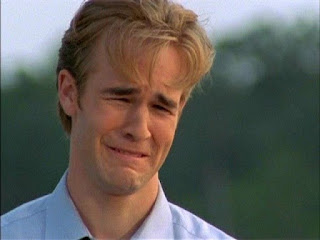 i feel you overly verbose high-schooler, i feel you. feelings are hard.

now, obviously, the cake does not come close to doing this scene justice. i couldn't even do his hair justice. don't worry, dawson, that situation gets better in season five when someone at the cw wb pointed out to your stylist that you're a very decent looking human being without the eric matthews haircut. very decent. still, this has to be my most favorite cake ever.

in this scene from the finale, dawson basically yell-cries at suri's mom to run from him and into the arms of one pacey witter. the scene is highly reminiscent of the saddest scene in cinematic history: the one in air bud where the kid throws the basketball so buddy will leave because if you love something you set it free, you know? except, poor joey potter, no one left any pudding on the dock for her.

and that's how i feel about private practice closing up shop. JUST GO. GET OUT OF HERE. IT HURTS TOO MUCH JUST TO LOOK AT YOU.

in all seriousness, that has easily been my most favorite experience ever. not only was it awesome because i got to be around people doing exactly what i hope to be doing one day, but all those people doing what i hope to be doing were super great people. they were the first people i met out here in this terribly ridiculous city (great food, though, los angeles!), and they were above and beyond lovely human beings.

so, if that's as far as i get in this business, if i never make another pot of coffee*, if i never collate another script, if i never write "c" on another can of the christmas coke to distinguish it from diet, if i never spend another two hours on a giant star of david, if i never glue another puzzle, then it will still be worth it. all of it. i'm terribly grateful for all of it. all the advice and support and free food. all of it.

and dawson leery is obviously the best way to tell you how much it all means to me. he's the best for most things, really. to everyone who i met there, upwards and onwards to great things for all of you.

TOTAL DECORATING TIME: 2 hours + the 14 years of my life before i discovered dawson's creek that i want back.