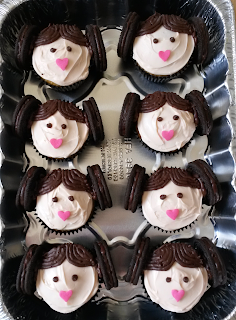 1. cupcakes are just easier to bake than cakes, hands (in oven mitts) down. i did bake more cupcakes than i needed because i wanted to eat some and i wanted to make them all as uniform as possible. so, i picked out the two dozen that looked to be about the same shape and size and threw out the rest. it was like the tinder of cupcakes.

except there are no losers in the tinder of cupcakes because cupcakes.

2. i barely had to mix any icing colors. mixing is lit'rally the most annoying thing and time consuming and most likely to tempt me to stick an entire spoon of sugar right into my mouth. the hair and eyes were just chocolate icing, straight from the tub. and the skin was just a dash of copper mixed into a vanilla tub. and done. tub is a fun word.

3. i never had to change icing tips. another tedious process. the hair, the buns, the eyes, and the "glue" holding the buns to the sides of the cupcakes... all the same. i know a lot of you probably don't "get" "it," but this is like an elevation of the game, y'all.

4. the lips aren't even icing!!!! just sprinkles!!! i only had to put them on, and then they were lips. can you even believe it? i'm crying just remembering it.

5. i had to walk 8 minutes to drop them off. these were for my boss's daughter's star wars tea party. star. wars. tea. party. leia and rey were there. i saw them. no big deal. and the venue was 8 minutes from my apartment. by. foot. y'all, i just...

the most challenging thing about this creation was the oreos. and that challenge was a like the last movie of a book-to-movie franchise, a two-parter. what a completely not clever reference.

part one. oreos are delicious and also very bad for you.

part two. whoever is inspecting oreos does not have a cupcake like this in mind. sometimes the cookies were crooked. sometimes the cream-filling was not even close to centered. is it cream? horse hooves? plastic? this part actually required some delicate surgery be performed because i was not about to let any of these little princess leias walk out of my kitchen with a single hair out of place.

but seriously, who is inspecting oreos? do you want to hang out sometime? call me.

TOTAL DECORATING TIME: 1.5 hours + a longer post than i was expecting. i thought i was making this easy on myself.

now a general,
sassy badger
Posted by b. k. friend at 1:27 AM No comments:

"things one and two" - just two plus one cakes

this post is actually about three cakes. a sassy badger blog first! such accomplishment. such celebration. congrations, me.

my boss asked me to make cakes for her daughters' birthday. you see, they are twins. but they are not identical twins. in case you don't know, this means that they lived in the same belly for awhile, but when they came into the world, they did not look the same. they were just roughly the same size and whatever.

anyway, i also understood twins to mean just two small humans. so, of course, i would only need to make just two cakes for their birthday party. but, apparently, my boss, a medical doctor and the woman who carried just the two of them around for many months, does not use such logic to make decisions.

it was their first birthday, after all. they would need a cake each to smash their tiny, roughly the same size hands and faces into. and there would need to be a third cake for the other people at the party to enjoy.

just two girls. three cakes. in what fucking world does that make... 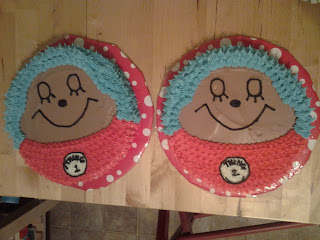 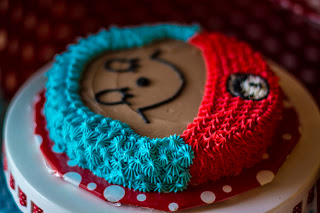 wow. such cute. such adorable. good job, me.

it was the first time a decoration had taken up the entire cake... if that makes sense. maybe we can just ask my boss, the logic genie, if it makes sense. one second.

turns out it doesn't make sense, so it does. but it was a new thing for me. i used different icing tips for the hair and the little shirts, and i think they look pretty stinking cute. such life and energy it gave me to see my blood, sweat, and tears smashed to pieces by four little hands (because there are just two girls) in a matter of seconds. it's like one-year-olds have no appreciation for adorable, hard work.

but, this, my friends was not where the whimsy stopped. whimsy? whimsie? because of its definition, you should be able to spell it however you fucking want. anyway, back to the wym-z... 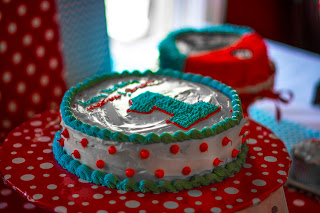 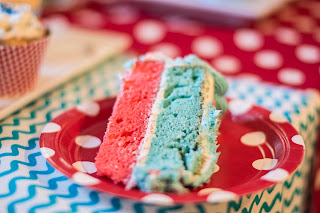 here is that unnecessary third cake. this cake wished both girls, just two of them, a happy first birthday! and was eaten by civilized adults and slightly older, smaller humans.

as you can see, i managed to find wrapping paper for the cake trays that matched the table cloths and plates... at hobby lobby...

TOTAL DECORATING TIME: 4 hours + a small donation to planned parenthood because hobby lobby is the WORST. it has the largest selection of sequins, though, for anyone looking to decorate their birth control holder.

these things will not bite you, they want to have fun. then out of the box came thing two and,
sassy badger
Posted by b. k. friend at 12:54 AM No comments: 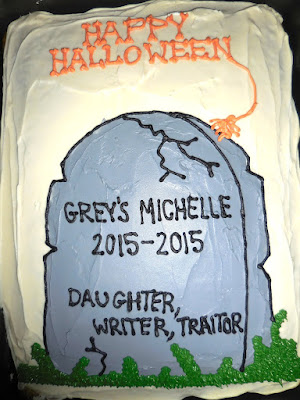 "hollywood is a fickle mistress," i said after looking up the term "fickle mistress" to double check that it means what i think it means.

let me spin you a tale, dear reader. a tale of shondaland legend. the tale of "michelle"...

so, like, michelle was working as an assistant at scandal. and then she started working at grey's as a writer. and then, a few months later, she was pulled back to scandal to work as a writer there.

the problem, dear reader, is that i really liked michelle. we spent all of our time together. i mean, not all of our time. just 10am-6pm. and just while we were at work. and our other co-workers were there. okay, so we just worked together. but we had a lot in common and enjoyed a lot of the same things, but now she is dead to me. hence, the tombstone.

just kidding. that would be weird and over-the-top. the tombstone was just because it was halloween, and me and another friend dressed up as michelle and pretended to be her...

nothing weird or over-the-top there.

but the tombstone was part-halloween and part-see ya never. nobody blames michelle for leaving grey's. she didn't have any choice in the matter. i just think, maybe, she could have been more sad about it. if she was, maybe the cake wouldn't have been so mean.

that's not true. it would have been just as mean no matter what. i pulled the same shit when nancy left. look, if you don't want a mean cake made about you, don't fucking leave me. it's pretty simple, y'all.

if i didn't have a giant knot in my shoulder, i would give myself a pat on the back for that 2015-2015 joke. and look at that grass! and that spider! and the font that kind of looks like bones! this is pinterest-level shit.

and, also, for whatever reason, i made the cake itself green... probably just trying to be spooky-scary for halloween, i guess. although, nothing was scarier than my boss eating like four pieces of this cake and the crumbs with his bare hands.

TOTAL DECORATING TIME: 2.5 hours + 1 pair of white knockoff birkenstock sandals that i only wore once for the "michelle" costume. will trade for a philly cheesesteak or best offer.

daughter, writer, traitor,
sassy badger
Posted by b. k. friend at 12:04 AM No comments: 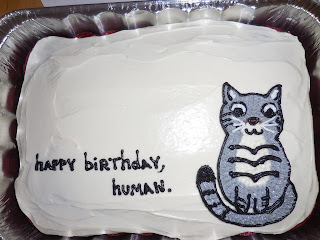 are you there, blog? it's me barbara.

i didn't want to feel like a totally lazy sack of shit, so i updated before an entire year had passed since i'd last written on this thing. the last time i posted was april 16. today is april 3. i am WEEKS ahead of schedule. and i made this cake last july, which means i have MONTHS before a year would have run out on that deadline... that's the thing about self-imposed deadlines: they mean nothing, and i never stick to them.

i made this cake for my friend, cassie. that thing on the cake is supposed to be her cat, louis. it was for cassie's birthday party. ugh. at a pool. gross. with a movie playing. kill me.

but i am an incredible human being - an infj on the myers briggs, just like mother teresa and nelson mandela and mlk - so i went to this shindig. and i brought a cake because i think cassie was serving something like brussels sprouts, maybe the most communist of all the cabbages, and as much as i hate parties, i know you are supposed to have cake when they are of the birthday variety.

the only thing cassie loves more than communism is her cat louis. he is darn cute, if you ask me. and i know you didn't ask me, but suck it up. i really tried to make this resemble him, but i think it ended up resembling totoro instead. 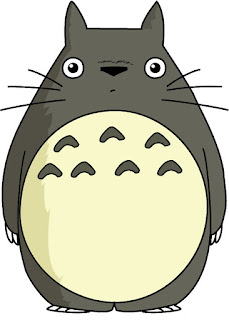 for those who aren't the least bit cultured: one, ew. and two, totoro is a character in a japanese animated film. maybe the cake was more on theme than i meant it to be. japanese = communists. film = communist.