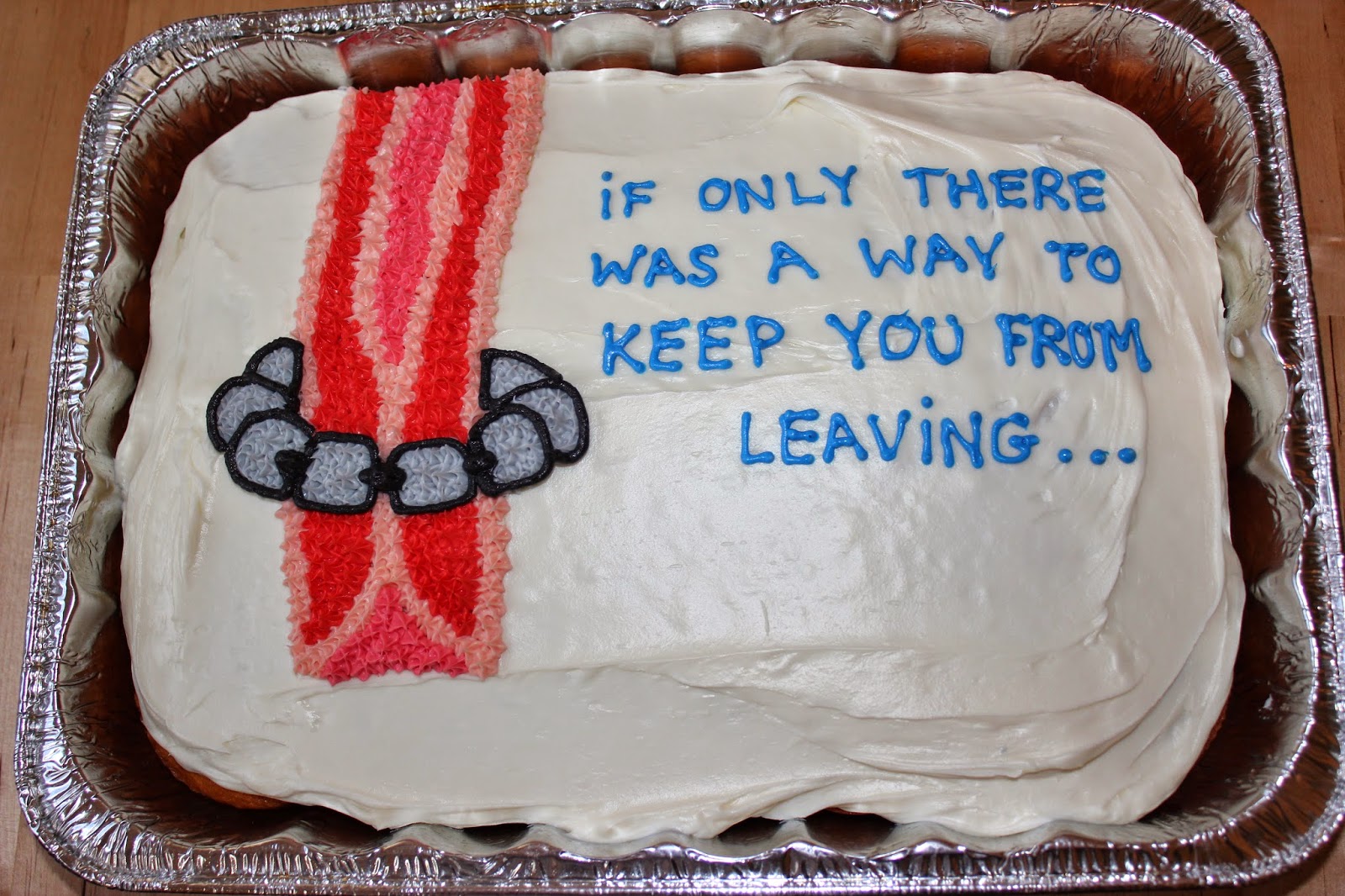 guys. girls. planktons. i don't even know where to begin on this one.

the anus is as good of a place as any, i guess.

for fans of grey's, you might have noticed that season 10 was the "year of the butt." we told a lot of stories about colons and butthole surgeries and rectal cancers. a lot of that is thanks to our good friend, dr. ruby, who had quite a passion for telling stories all up in those parts of the human anatomy.

beauty is in the eye of the butthole, they always say.

probably the most memorable of dr. ruby's stories came in the penultimate episode of last season, in which she pitched the "megnetic sphincter." you see, dr. ruby is from wisconsin (go badgers!), and she said a lot of words in a weird way... "megnet" instead of "magnet." where you and i might say "bag," she said "beg." where i might say "something fun to do in my spare time," dr. ruby would say "prostate exam."

back to the magnets.

there is a magnetic bracelet-like device that is used on the esophagus to help patients with acid reflux. basically, the magnetic beads keep the food from coming back up. for our story, we put these magnetic power beads on the rectum to keep all the icky stuff from coming out the poop chute just for funsies.

because it was one of dr. ruby's proudest story pitches, i thought there would be no better way to send her back to wisconsin than with a cake depicting her magnetic sphincter and, of course, an anus.

i can say, it's the most medically involved a cake has ever been. it's also the most disgusting and heinous thing to ever exist on a baked good. dr. ruby was always pushing me past my comfort zone. a job well done, my friend, well done.

TOTAL DECORATING TIME: 2 hours + it is my bed time. i'm too tired to come up with something here.

zzzzzzzzzz,
sassy badger
Posted by b. k. friend at 2:29 AM No comments:

here's the story of a little booty.
that was laying around in our writers' room.

and that's as far as i got on that brady bunch parody. can't say i didn't try. 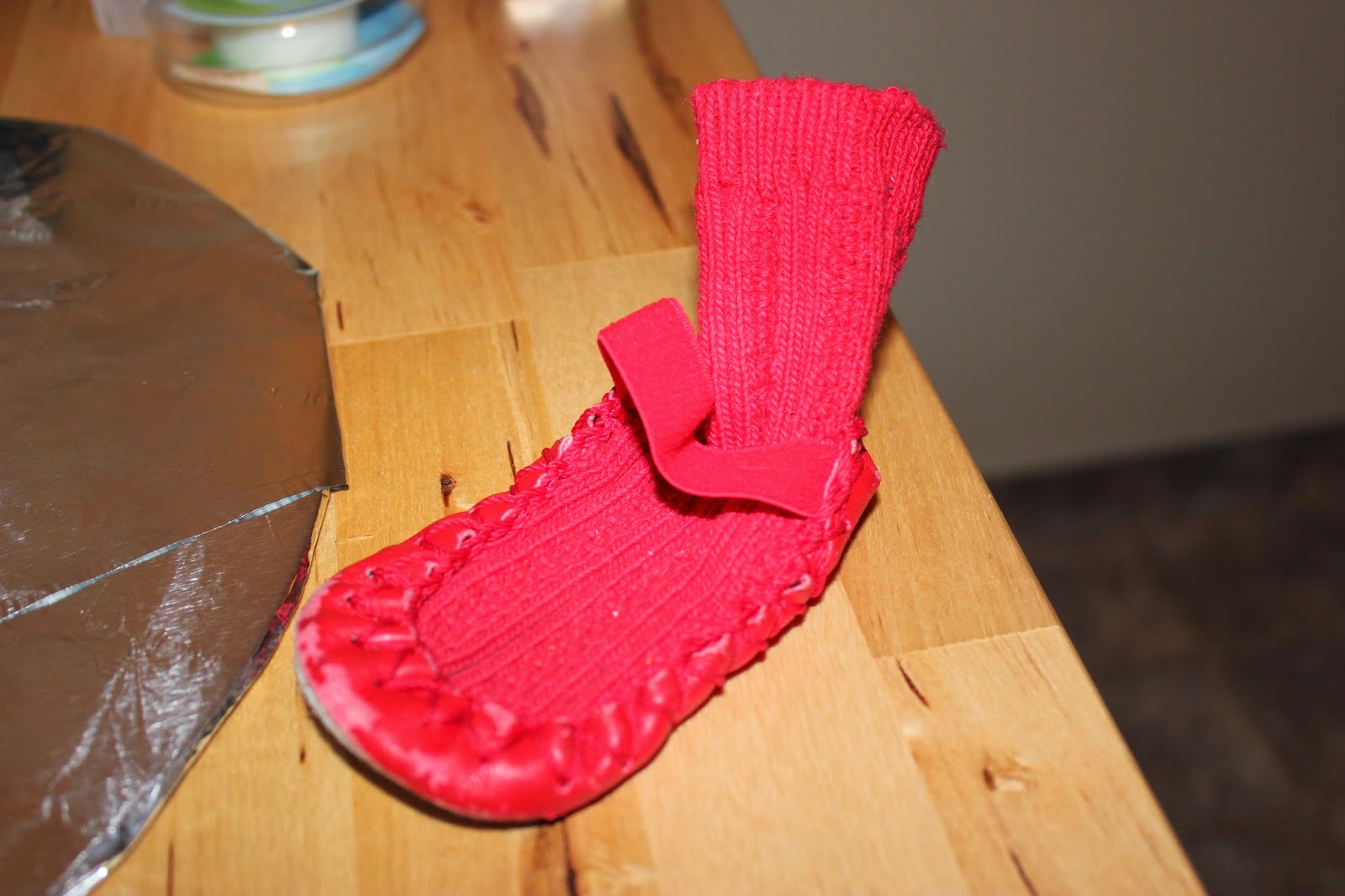 this red booty was found in our offices one day, long before i even started working there. no one knew where it came from or what possessed it to appear, but it has become a running practical joke between two of the writers.

basically the booty gets passed back in forth in a variety of ways, in ways the writer least expects, in ways that involve a lot of work. in one way which i will document below... 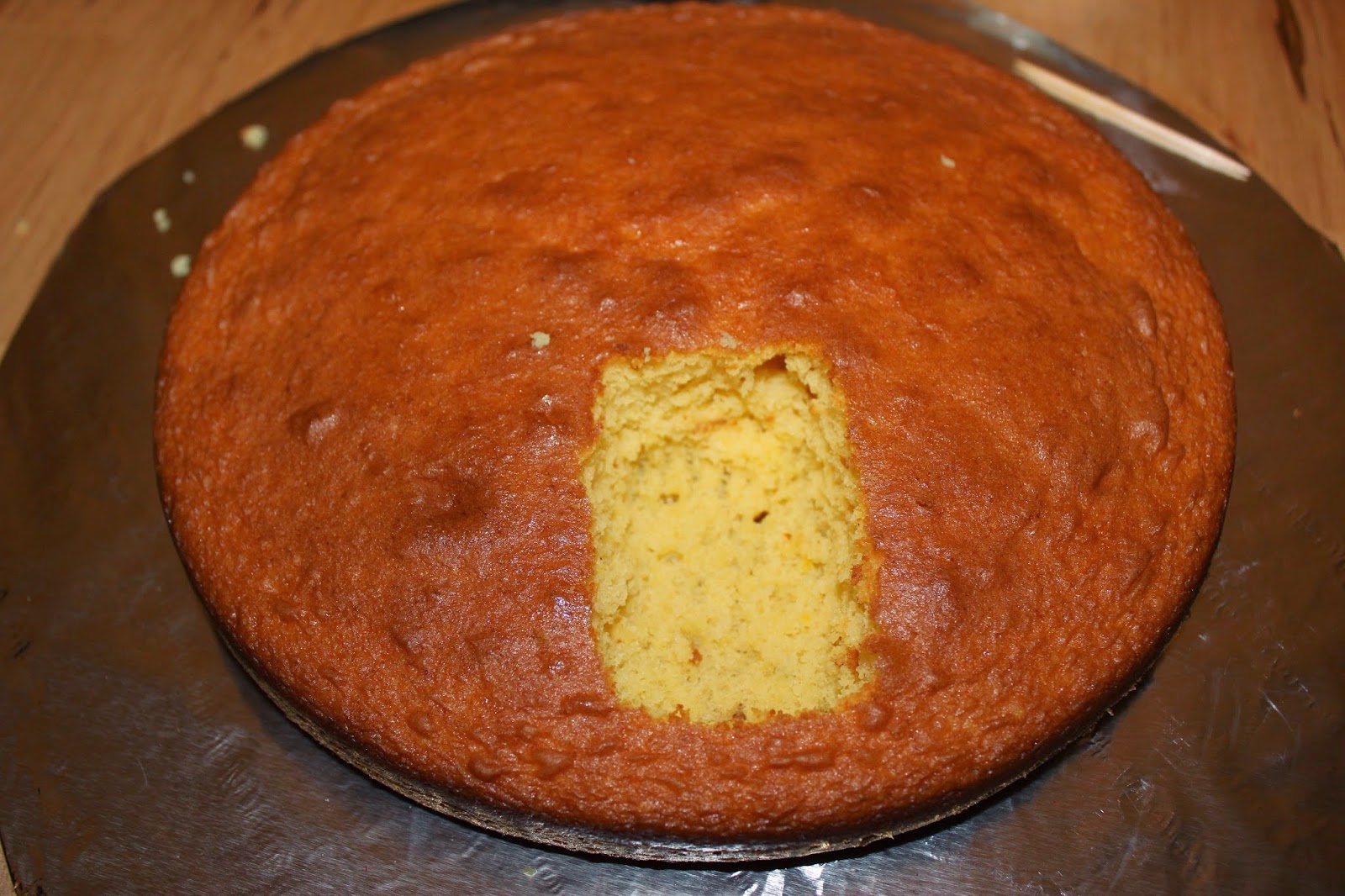 i was asked by the pranker to hide the booty inside of the prankee's going away cake. a cake that was going to be shared by a dozen innocent bystanders. obviously. so, first, i delicately cut out a hiding square.

"hiding square" is also what i call a restroom stall when i'm at a party i don't want to go to... 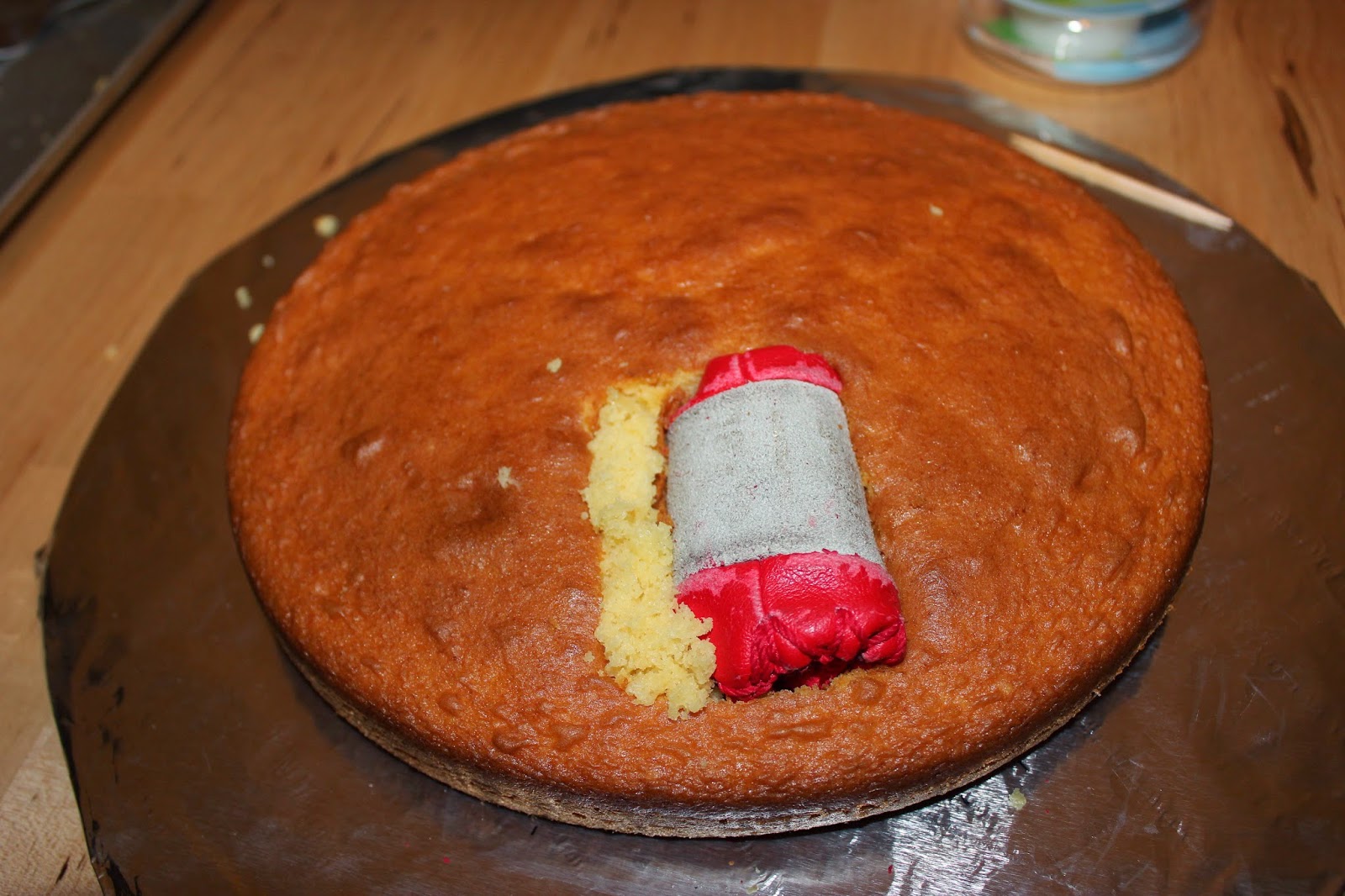 then, i rolled the booty up and filled in the remaining space of the hiding square.

that took some serious, black-ops, martha stewart-esque engineering, let me tell you. whenever it's convenient, you can send me an honorary masters in pranking crafts from whichever accredited university carries such a graduate program. i covered that layer in icing, put the other layer of the cake on top, and bam! 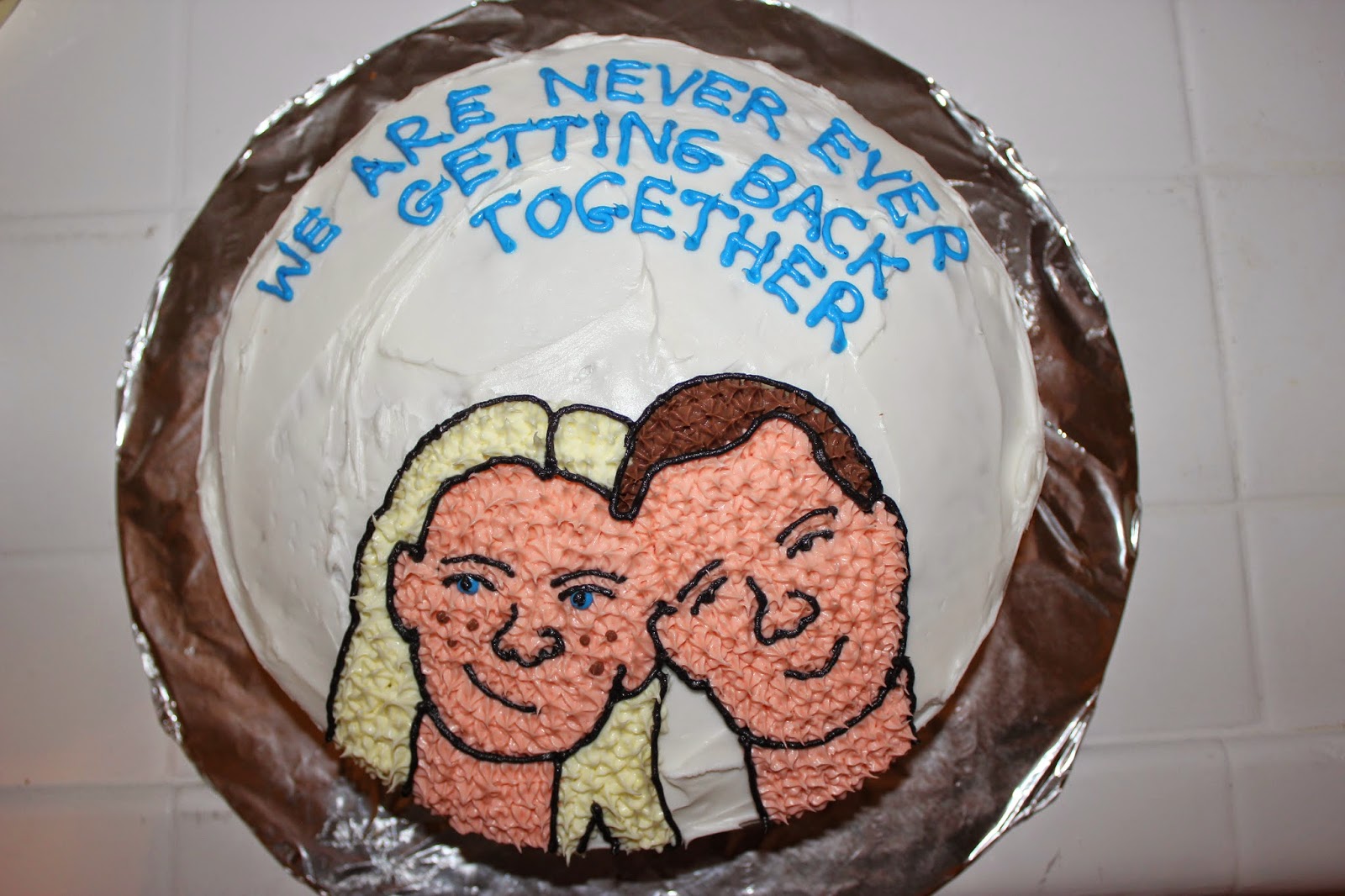 the decoration itself is a picture of our two bosses who were leaving grey's at the end of last season, one of whom was the prankee. and they are joined at the head in reference to an episode of our show, written by the prankee, in which two twins were joined at the head. and it has a taylor swift quote because 1. that was the title of said episode written by the prankee, 2. it's like relevant and shit to the situation, and 3. t swift is a goddess and she deserves to be worshipped in every way, shape, or form.

needless to say, no one ate this cake because the booty was covered in years of dirt and pranks and, likely, witchcraft. still, for a cake that wasn't eaten, i'm pretty pleased with the result. and just because i'm never going to get to say it again... prankee. 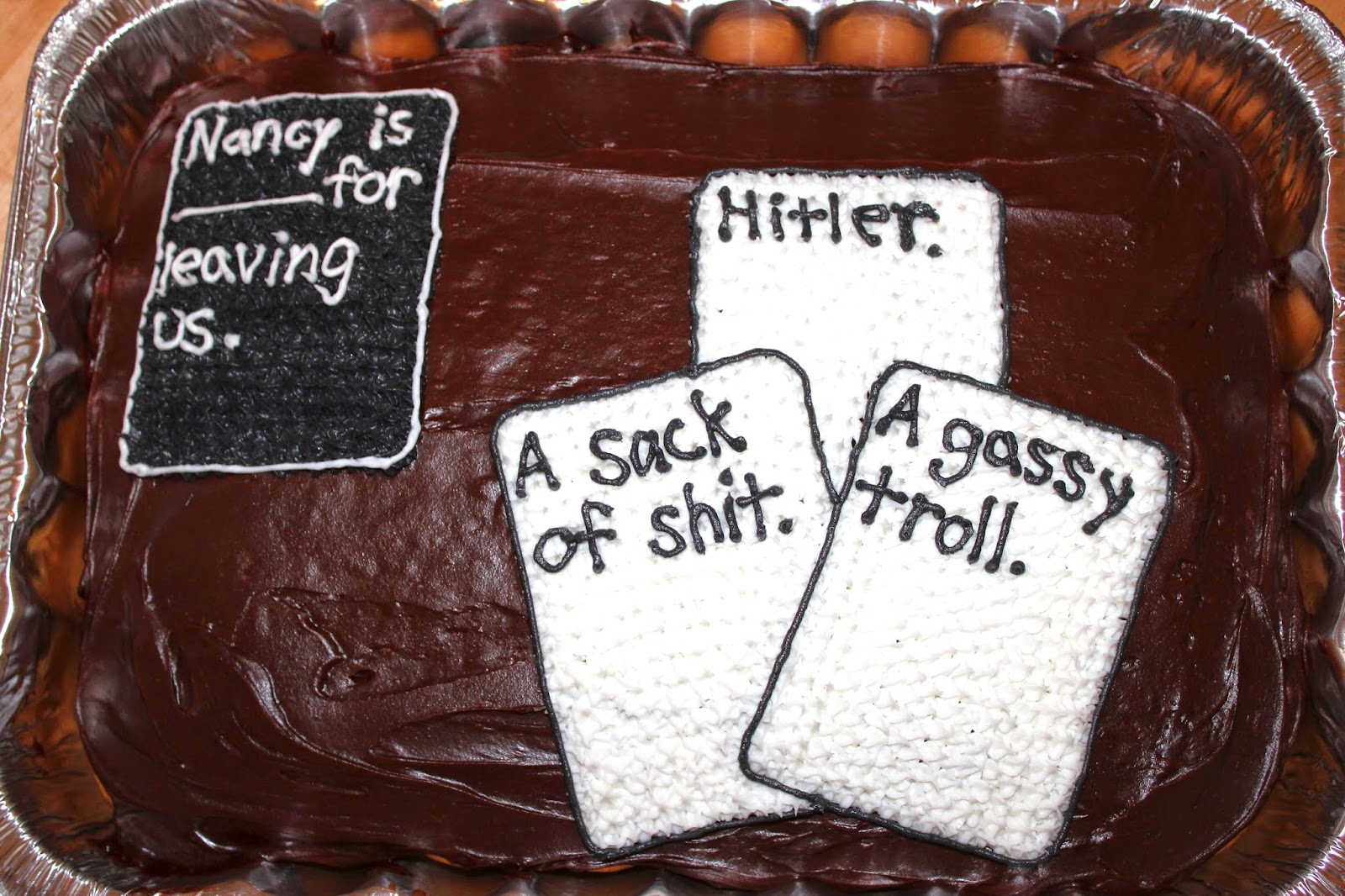 "cards against humanity" and cake are actually very similar, if you think about it. you don't have to think about it, but if you do...

i will say that "cards against humanity" and cake are both great for the grey's writers' room. those people eat like pigs and speak like pagans... the kind of people you want to spend an eternity in hell with. they are also a bunch of traitors. mostly nancy. because she left us. to go write on another television show. la di fucking da, nancy.

do you want to know how i really feel about it? well, i think i made that pretty obvious. and i think i also made it pretty goddamned delicious.

forgive me, father, it has been six years since my catholic guilt was strong enough to drag me to confession. i have recently taken the lord's name in vain. very recently. just a few sentences ago. for my penance, i will pretend to say three our fathers and ten hail marys while i'm actually just thinking about how uncomfortable the kneeler is and whether or not i'll ever get this popcorn kernel out of my teeth. trust me, i know how long to stay in the pew to make it look legit.

anyway, nancy, you traitor/sack of shit. i hope you're miserable on your new show. i hope they never play "cards against humanity," only "apples to apples." and i hope they never have cake, only gluten-free bran muffins. you deserve it!

TOTAL DECORATING TIME: 1 hour + 7 months to finally post this thing aka 7 months of wondering why i took over nancy's job. i mean, i've seen the names people called her...

a party game for horrible people,
sassy badger
Posted by b. k. friend at 1:24 AM No comments: 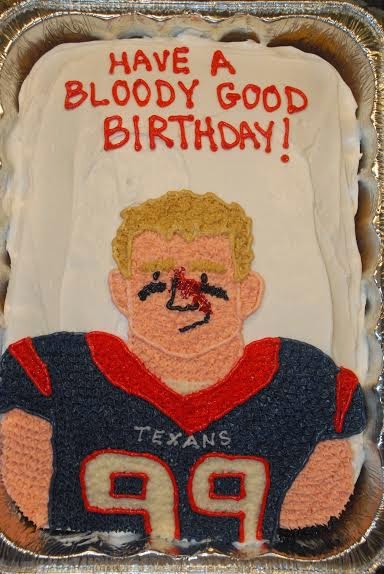 first thing's first... do you guys even know who jj watt is? if you aren't from houston or you don't like sports then 1. i hate you and we have nothing to talk about, and 2. you likely have no idea who this is even supposed to be.

so, jj plays sportsball for the houston sportsball team. he's very good at sportsball. maybe the best. he's also the nicest person who has ever existed.

because he has sportsball prowess and out-nices the son of god and has a pleasing face, jj has stolen the hearts of every woman, man, child, and horse in the city of houston. (screw you if you thought we had horses in houston. you're ignorant. i hate you and we have nothing to talk about.)

so, even though i made this cake for one of my best friends*, with some improvements, i could probably sell this cake in mass quantities to every woman, man, child, and horse in the city of houston. i could even make enough money to buy the houston sportsball team. 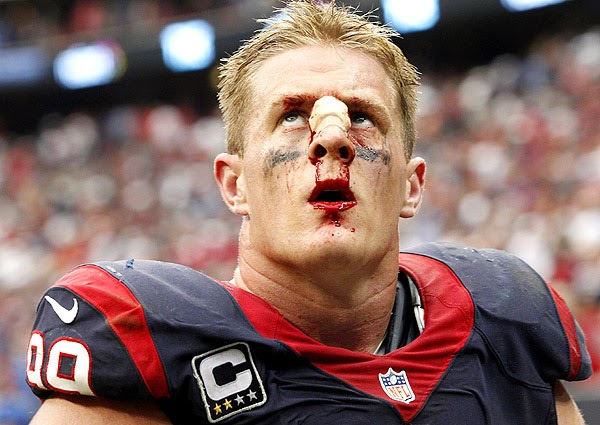 i guess the cake is not that bad. i got his sportsball costume and make-up correct. i made his hair the right color of bland wheat color in a wheat field. and, most importantly, that blood, dude.

ok, since you dummies thought we had horses in houston, let me tell you now - that. is. not. real. blood. it's red food coloring. go back to whatever liberal, east coast city you were raised in. i hope you enjoy your quality public transportation, you idiots!

but one, that blood allowed for a great pun. and trust me, i know about puns. you can trust me because i've said i know about puns before. two, as anyone posed with the cake, the blood started running down jj's face. just like in real life! it's the first time one of my cakes has involved such an interactive-audience-participation-required component. should've charged admission to this thing...

look at all these amazing business ideas i have! i'll own the houston sportsball team in no time.

they call me the milkman,
sassy badger

*it's really a friendship of convenience. she only lives five minutes away. any further and my horse would get too tired to make the trip so many times.
Posted by b. k. friend at 12:50 AM No comments:

"louis and mowgli" - you're welcome 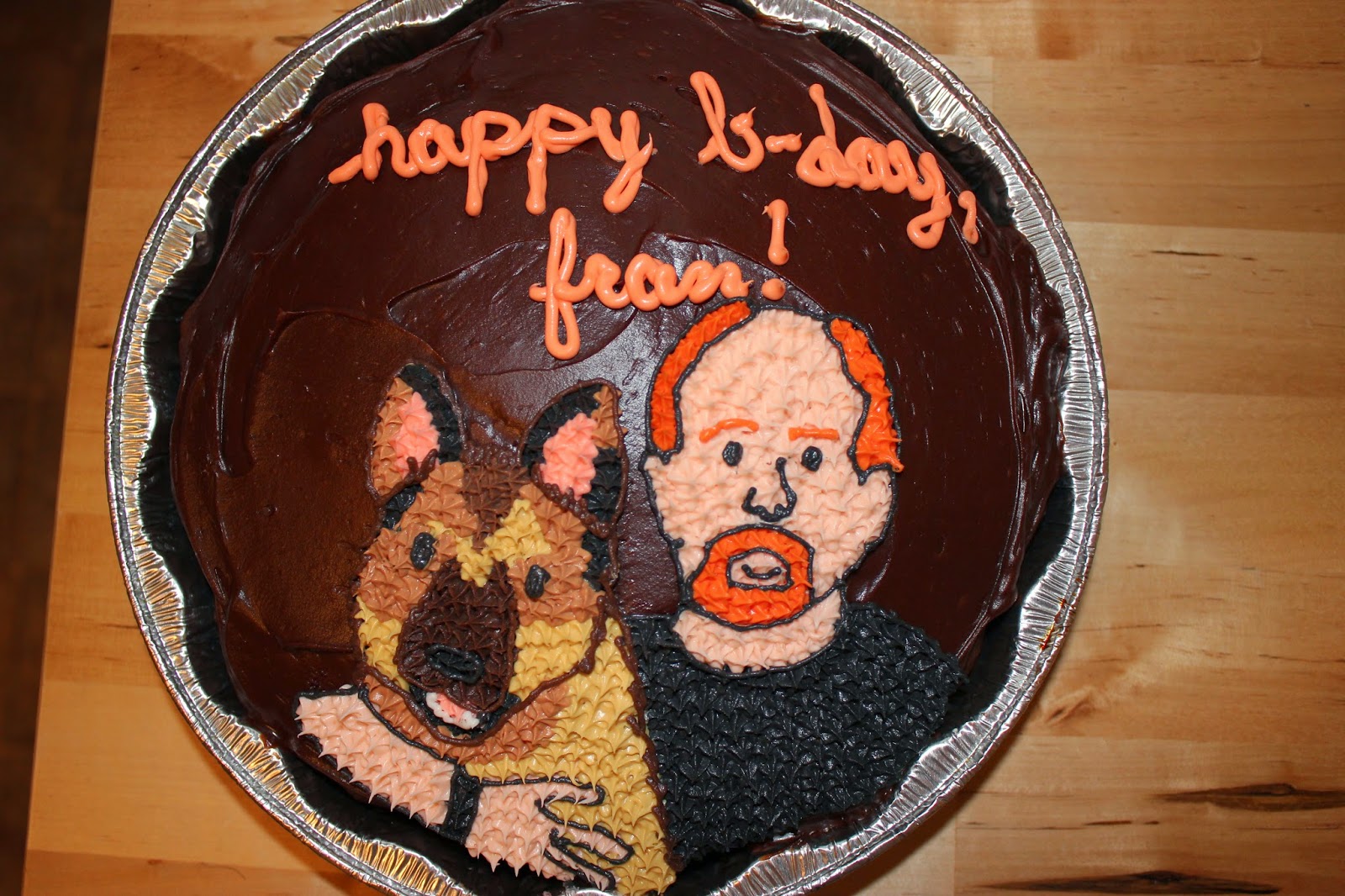 this cake was made in november of 2013. it's may of 2014. the other day i couldn't even remember my new year's resolution about being a more productive human being, so i'm not even going to apologize for this sickening amount of procrastination.

as an (i thought) established rule of thumb, i do not take requests for cakes from people unless they are'a paying me'a the big'a bucks'a. if you didn't read that with an italian accent, you're'a wrong'a. but, yea, i usually just fucking make a cake and that person has to deal with it. and they have to eat it. and they have to like it. or. else.

oh, you didn't want me to put something embarrassing or completely inappropriate on your cake? don't care.

instead, i made a cake of her dog and her favorite human being, louis ck. joke's on her! that's what you get for trying to tell me what to do. you get something better than what you even asked for! so... ha!

i know we've already established that dogs are super offensive, but maybe some of you harbor similar feelings towards gingers. if that is the case, i, again, am sorry about it. i didn't mean to subject you to something so horrendous without fair warning. also, men in general, right? they're the worst. this cake is just disgusting.

anyway, moral of the story is, don't try to pressure me into doing something that i don't want to do. don't even think about it. unless you want me to just lay down and take it. i think i'm going to add "standing up for myself" to my new year's resolution. somebody remind me about it tomorrow!

TOTAL DECORATING TIME: as if i remember something from 6 months ago +  i am wearing a hat. i forgot how this blog works.