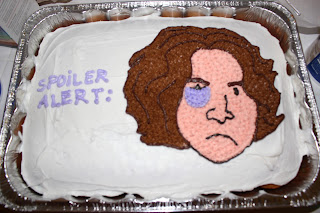 this is supposed to be violet turner with a black eye, as per episode of 512 of private practice (written by gabe llanas, available on hulu). now, if you're either a man or younger than 43, you're probably asking who is violet turner? what is private practice? i've said it before, and i'll say it again - ask your mom.
[SPOILER ALERT] basically, violet gets the crap beat out of her: 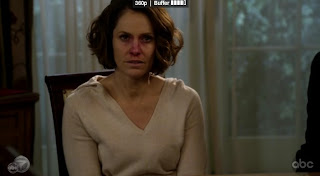 yea, your mom's show can get violent, too. sometimes. very few times. but, in the words of janet jackson, this episode got "nasty boy."
this obviously doesn't look a whole lot like what it is supposed to look like, except for the hair. that hair was not fun to figure out, but i think it turned out pretty good. other than that, it's a pretty generic face and the "black eye" looks more like a bottom-lid purple eye patch. do they make those? dibs on that invention.

oh yea, i made this for a viewing party for the episode. it's not like i make cakes for myself while i watch tv... i buy frozen "dinners for one" when i do that.

ps - the new sassy badger banner art is courtesy of my friend jenno. i appreciate when she does things like that rather than things that she is supposed to be doing.
Posted by b. k. friend at 2:37 PM No comments: