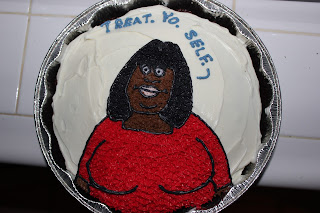 i made this cake on the same night as the previous post, so i don't remember much about this one either except that this was the first time i've put boobs on a cake. first time i learned what boobs are, too. talk about growing up.

however, i had no choice, as donna is not donna without her donnas, ya know? excuse me while i just go throw up and write each of you a personal apology.

it, of course, was not really a big deal. i mean, i've done naked starfish butt in the past, so this was totally prude-y in comparison. still, it was kind of strange thinking about what i was tracing, as donna is played by a real human being, whose icing boobs i would soon be eating with my friends.

i wish i was seeing a therapist so i could talk about my sexual hangups with pop culture baked goods.

boobs aside, i thought this turned out pretty well. the eyes are judgmental enough, and i like to pretend that she is bugging out over that shitty text alignment. probably had something to do with the fact that i closed my eyes to erase the image of boobs from my mind. i gotta stop saying boobs.

anyway, i'd like to include a previous cake here because i think they make a nice set, and, maybe, some day, i'll do a whole parks and recreation line. collect them all for seven easy payments of $9.99! 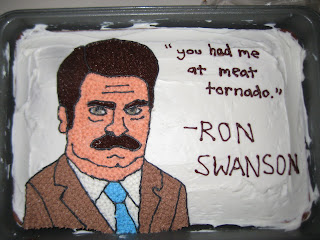 TOTAL DECORATING TIME: 1.5 hours + 1 emmy for you amy poehler. in my heart. 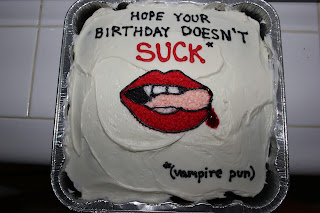 this cake was made about infinity weeks ago, so i don't remember what super intelligent things i was going to say about it. i do, however, recall that this cake was pretty easy... like all those vampires in true blood, am i right? heyooooo.

i have not seen enough of the show to know if i am, in fact, right. anyone? are they easy lays? do they sparkle?

anyway, this cake probably had the worst ratio of "time spent deciding how to decorate it and then pretending to draw it for a hot minute before giving up and tracing it" to "time spent actually decorating." but, i have to say, like, really, what a payoff. puns like that, fully formed expressions of comedy, don't just reveal themselves for any poser. it takes a real kind of artist to free something so beautiful.

pretentious twenty-something with a blog, coming to your television sets in 2013.

speaking of icing, though, that is legitimately some of the best black icing i have ever mixed, and it was because i cheated and half-mixed-half-bought the pre-made black icing. excuse me while i go pray my 6 hail mary's and 3 our glory be's, the typical fare for crimes against baking. oh by the way, father, while i'm here, we good on eternal salvation?

TOTAL DECORATING TIME: 30 minutes + the year of my life i spent reading twilight fanfiction that i would like back. vampires, man, why the have to be so sexy?

i wanna do bad things with you*,
sassy badger