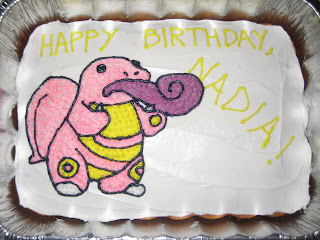 here's a sad truth i've discovered: the nerdier the image, the easier it's going to be to decorate. i mean, honestly, lickitung has some of the easiest shapes and fewest colors i have ever worked with. thanks a lot pokemon artists! could you not set aside your gameboy and put your comic books down long enough to draw some more intricate characters? many thanks, sincerely.

we also ran into a bit of a transportation problem with this one, seemingly obvious advice to follow...

take a picture before the cake leaves the counter. we tried to illegally sneak this one into the school's cafeteria... in a tote bag... turned up on its side. let's just say, tote bags aren't nearly as icing absorbent as you might think.


TOTAL DECORATING TIME: 2 hours and 3 bloody hangnails (how else do you think i mixed pink icing?)

wash your hands and cover your cough,
sassy badger
Posted by b. k. friend at 7:47 PM No comments: 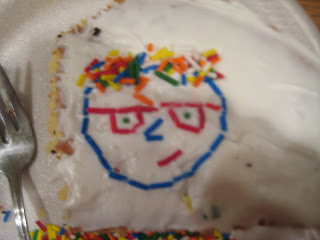 real cake decorating involves nothing to do with sprinkles. amateurs.

i'm not totally serious, but once you start spending 4 hours on your cakes consistently, you won't have any idea how to handle something as uncontrollable as sprinkles. then in walks my baking OCD, and i spend about 30 minutes separating sprinkles into colors.

in short, get your decorating fix however you can. you will sleep better.

TOTAL DECORATING TIME: 35 minutes, which was 30 minutes longer than everyone else with my family

whip it, whip it good, 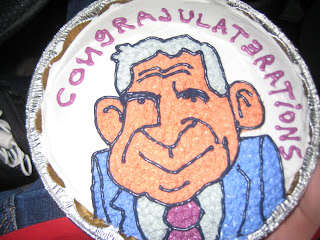 in his 8 years in office, there were probably about 1.6 million cartoons of george w. floating around. however, on the day that i need to put him on a cake, i cannot find a single one that works for me. BUT i had less than 3 hours, so i settled. i did not even bother to trace it, and voila! it looks nothing like him... instead it looks more like that guy from "the closer."* see: 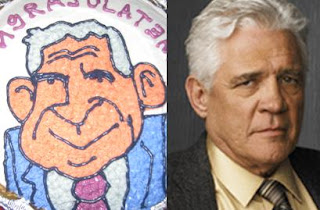 also, with no time, i sort of didn't mix colors very well (or at all). no worries, "skin tone" looks like a spray tan at spring break, if mixed improperly - which is definitely what i was going for... and i just used whatever other colors i had. when did george bush not look good in a powder blue suit and magenta tie?

TOTAL DECORATING TIME: 1.5 hours, a personal record with such subpar results. it's like you and dumbledore finding the locket so fast but then discovering it's not a real horcrux.