"la galaxy" - against my will 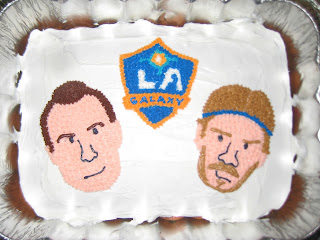 Ook, this cake has to do with soccer. so, to all you americans out there, try to keep up. actually, all you foreigners keep up too because this deals with the MLS (American soccer), which no one follows.

so, i, being from houston, like the dynamo, and gabe and craig, from work, having lived in LA for awhile, cheer for the galaxy. obviously, this meant that some sort of bet was necessary between the two parties. the bet underwent a few drafts before it was finalized. one of the versions involved craig getting his own breakfast, but heaven forbid that happen, so we settled on something else:

if the dynamo should win, gabe and craig were required to each make and decorate a cake in support of the dynamo. craig's children could help him but not his wife.

(side note: one of the writers, who's from houston, wanted houston to lose so that we wouldn't have to eat whatever concoctions these two aces came up with.)

if the galaxy should win, i was required to make and decorate one cake in support of the galaxy. The type of cake would be craig's choosing, and it had to involve donovan, as per gabe's request.

surprise, surprise. the dynamo lost, and i owed them a cake. to make a long story only a little bit shorter: craig wanted a butterscotch cake. i tried it. i burnt it. no one else wanted butterscotch anyway. so, i went with funfetti.

i'm pretty happy with how landon donovan and david beckham turned out, especially beckham's "pedo-stache," but the logo... that's what i get for doing it without tracing it first. whatever. over it.

TOTAL DECORATING TIME: 2.5 hours + 2 hours at the championship game surrounded by drunk, ignorant galaxy fans in the rain. worth it?