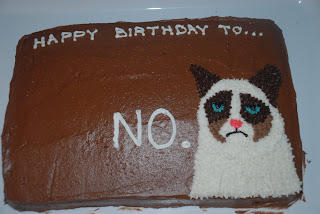 grumpy cat beats everything else paws down. four out of four paws for you, grumpy cat! two paws way up. have i beat this thing to death yet? pawsibly not...

maybe if i actually had a badger who helped me bake and stuff, or one who just licked the bowl and then hissed at the camera, this shit would go viral. we'd go on all the morning talk shows and the daytime ones and the late night ones. but, as i learned after picking this moniker, badgers are fucking vicious. and so, i'm already imagining the lawsuit ellen would file after sasser the badger took a chunk out of her calf, making it impawsible for her to dance again, and it just seems like too much paperwork to deal with, you know?

apparently the chocolate icing out of the can isn't good enough for my sister's standards, so i had my mom make some from scratch. new logo, hired* help... we are classing it up in this bitch.

the best** part of this cake was that my dad did not understand how grumpy cat worked and ask that i draw dialogue bubbles to explain who was speaking which part of the wording on the cake. forgive him, grumpy cat, for he is an accountant.