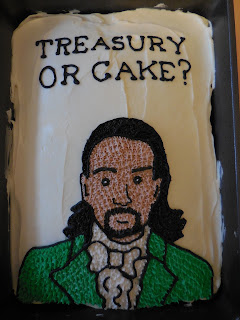 yeah, okay, it's been awhile. everyone's used to it by now.

typically, when the sassy badger drops a masterpiece on a party, it elevates the soiree out of mediocrity. how many of your college dorm parties had a custom pokemon/spongebob/lotr cake? a lot of them? well, then you were friends with me, and that doesn't count. and also, you're welcome.

all you other losers just had lame parties with alcohol and maybe people to sex with afterwards. gross.

this cake, on the other hand, was merely a blip of whimsy in an all-around evening of unmatched greatness. three words for you: hamilton karaoke party. if you don't like karaoke, fine. if you don't like hamilton, get the fuck out.

not only am i obsessed with the musical (after all, i'm not a worthless pile of garbage), but this kind of karaoke was where the hired dj just played the track and you sang along, and it masked your eternal-boy-going-through-puberty crooning. truly, the only kind of karaoke for me.

another three words for you: best. party. ever.

there were some professional hamilton cupcakes at the party as well. they looked much better than my contribution, but in my heart of hearts*, i know that human sunshine lin-manuel miranda would still tell me i did a good job. lin's opinion is the only one that matters.

thanks, lin. i love you.