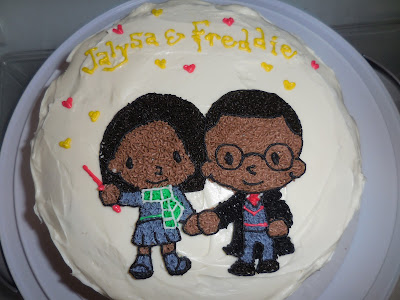 my co-worker is one of those people who loves harry potter. she also loves her husband-to-be, but he did not love harry potter until very recently, and so, i do not, for the life of me, understand how she loved him before then, but okay.

still, once husband-to-be got his head out of his ass and got on the harry potter train (insert hogwarts express reference or pun or yadda yadda yadda), he was sorted into gryffindor. okay, i guess he is seeming more and more like a decent guy. except for the fact that my co-worker is a diehard slytherin.

everyone knows they're doomed. good luck to you, crazy kids!

honestly, this is one of my favorite cakes i've ever decorated. obviously. i mean, just look at it. it's really fucking good. this is just the kind of quality you come to expect when you come for the sassy badger. i don't know anymore, it's late.

while making it, i also realized that it was the first harry potter-themed cake i'd ever decorated. i cannot imagine how this is possible, but it's true. if this cake is a bludger, then i am a beater, and i smashed it out of the pitch. no one gets a harry potter cake ever again. this can't be topped. sucks for y'all.

mischief managed,
sassy badger
Posted by b. k. friend at 1:45 AM